Identification of glucokinase monogenic diabetes (GCK-MODY) in pregnancy is important as management differs substantially to gestational diabetes (GDM).  Screening criteria for GCK testing exist for non-pregnant populations(Fasting BGL 5.5-8mmol/L and increment <4.6mmol/L).  New pregnancy-specific GCK screening criteria have recently been proposed(Fasting BGL ≥5.5mmol/L and BMI <25kg/m2)1.  These criteria were developed in a predominantly Caucasian population.  Their widespread applicability to other ethnicities has not been investigated.  We examined the prevalence of GCK mutations in a multiethnic GDM cohort of 776 women attending the RPAH GDM clinic(2008-2012).  We identified 63/776 whose postnatal OGTT met standard GCK screening criteria, warranting genetic testing.  GCK mutations were detected by sequencing and multiplex ligation-dependent probe amplification.  For GCK-MODY cases found, we examined the performance of pregnancy-specific and standard criteria in pregnancy.  In a larger, multiethnic GDM cohort of 4115 women, we determined how many women would be identified for genetic testing using these criteria, stratified by ethnicity.

31/63 women were available for genetic testing.  4 were diagnosed with GCK-MODY(Table 1), giving an estimated prevalence in GDM of 1.04%.  All Caucasian women would have been identified by the pregnancy-specific screening criteria.  However, one Indian subject would have been missed.  All would have been captured by the standard criteria applied in pregnancy.  In the larger GDM cohort, 6.1% vs 14.2% would be referred for genetic testing using the new and standard criteria, respectively; 3.2% Anglo-Celtic vs 8.0% SE Asian women would be referred with new criteria(Table 2).

The estimated prevalence of GCK-MODY in our multiethnic GDM population is consistent with other studies. The new pregnancy-specific vs standard criteria will reduce the need for genetic testing by more than 50%, but refer a disproportionate number of Asian/Indian women.  The new criteria perform less well in these ethnicities vs Anglo-Celtic populations.  Ethnic-specific GCK screening criteria in pregnancy should be explored. 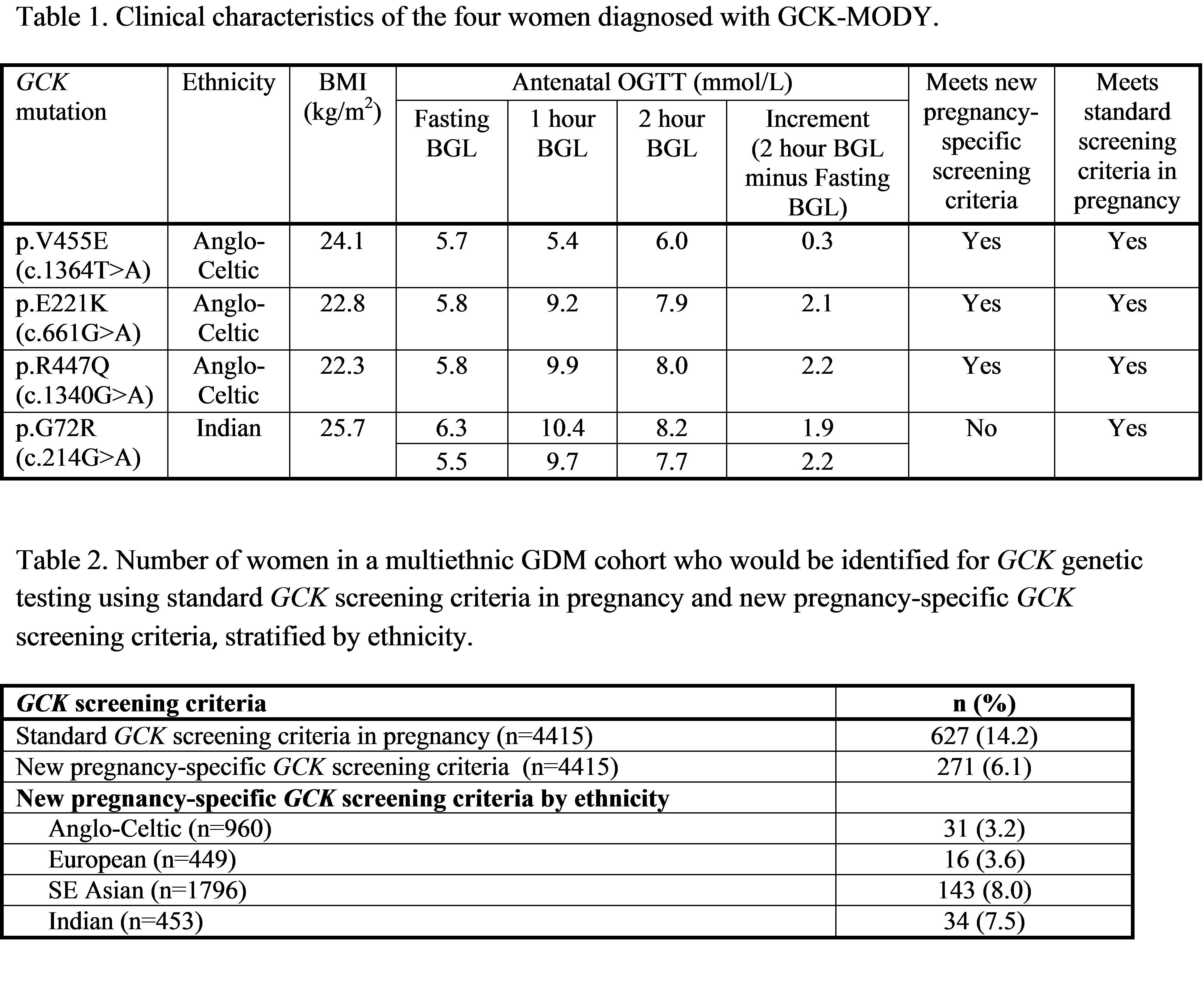